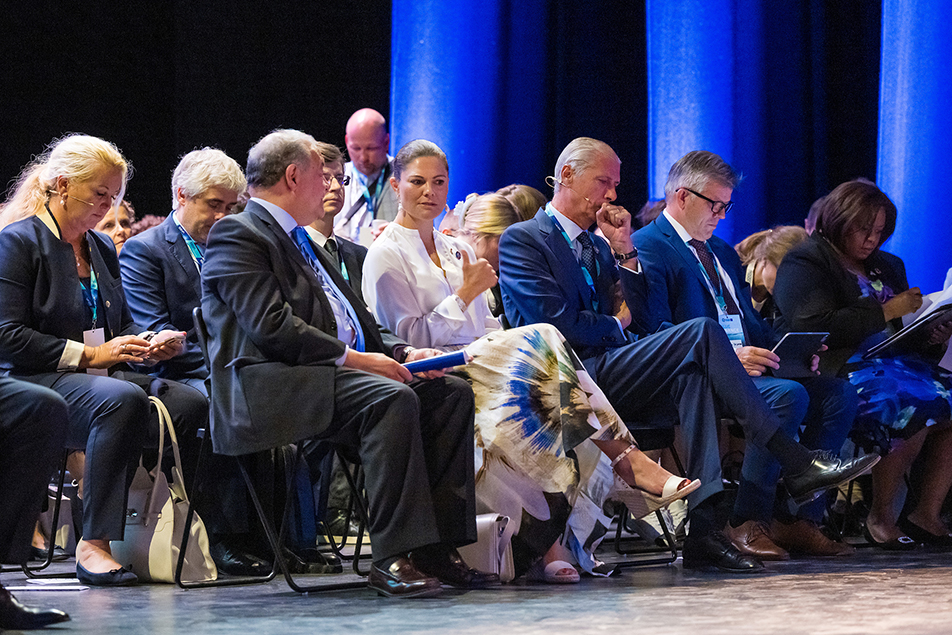 This year's conference was co-arranged by Kenya and Portugal. 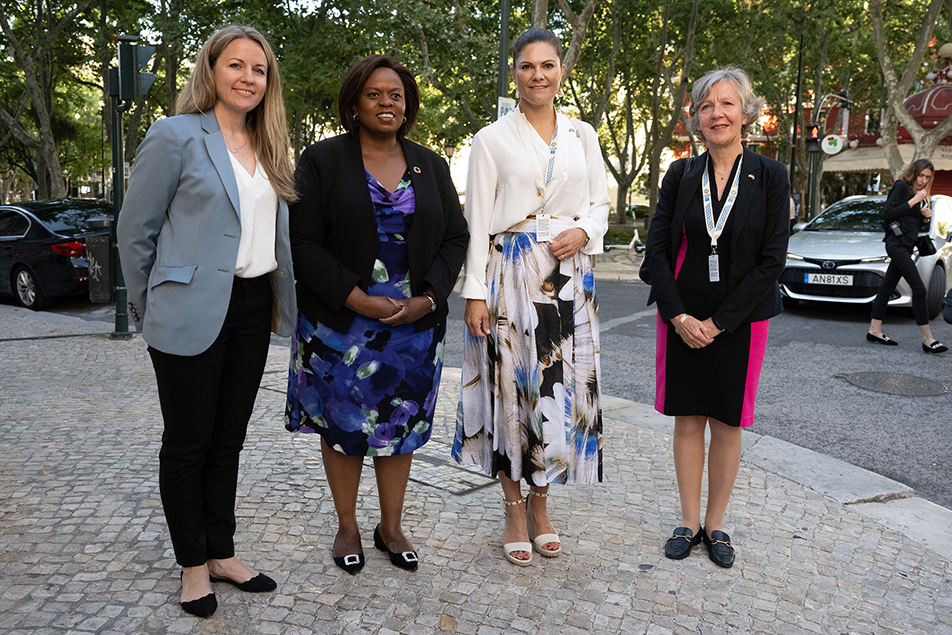 The Crown Princess began her visit by attending a side event focusing on how fisheries financing can be steered towards a so-called blue economy by creating the right conditions for profitable marine investments. 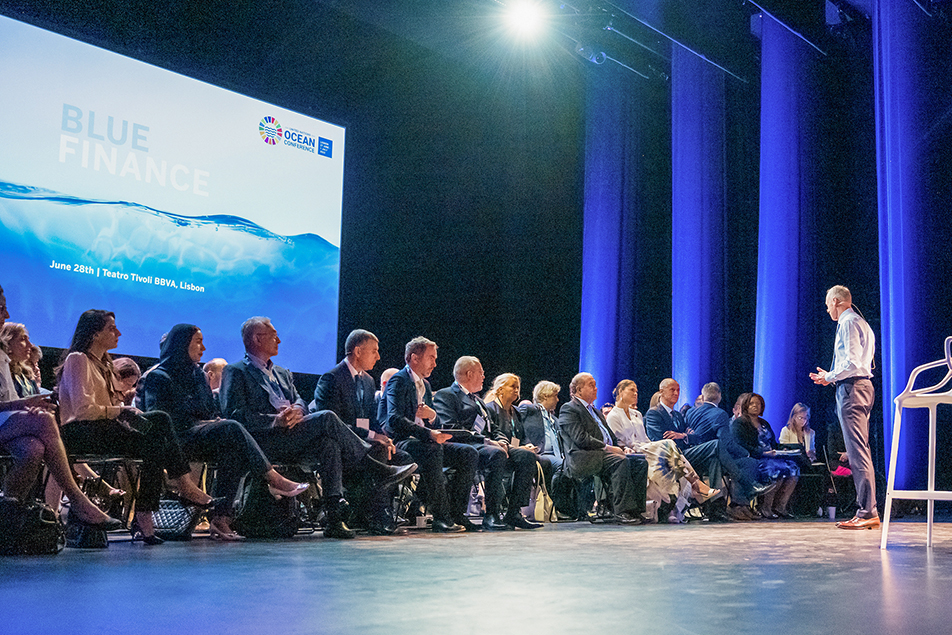 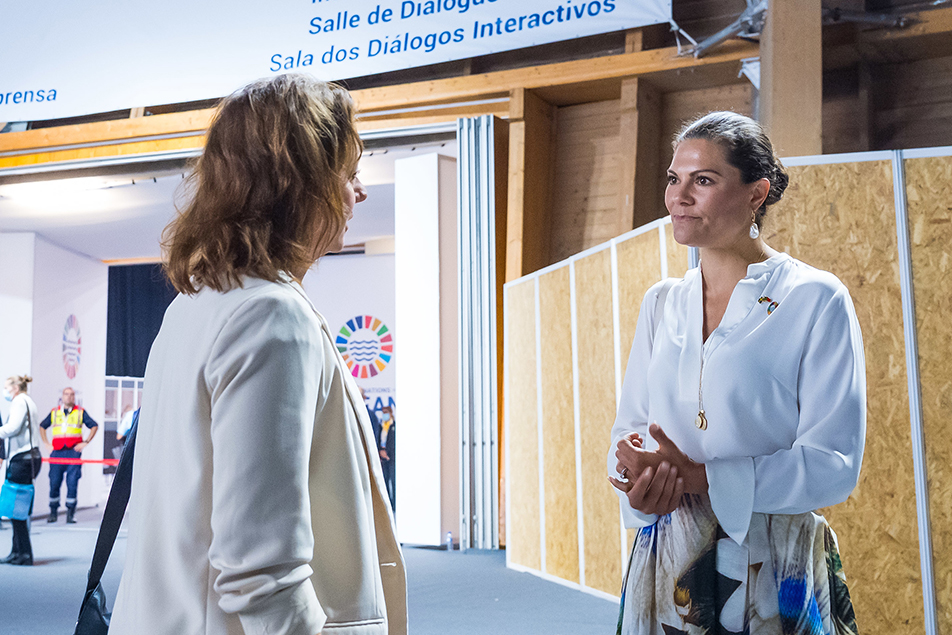 The Crown Princess then took place in a side event, 'Joining the dots between sustainable maritime logistics and planetary boundaries', at which Minister for International Development Cooperation Matilda Ernkrans gave an opening speech. During the event, Sweden and Finland demonstrated how the two countries are at the cutting edge of developing sustainable shipping solutions. 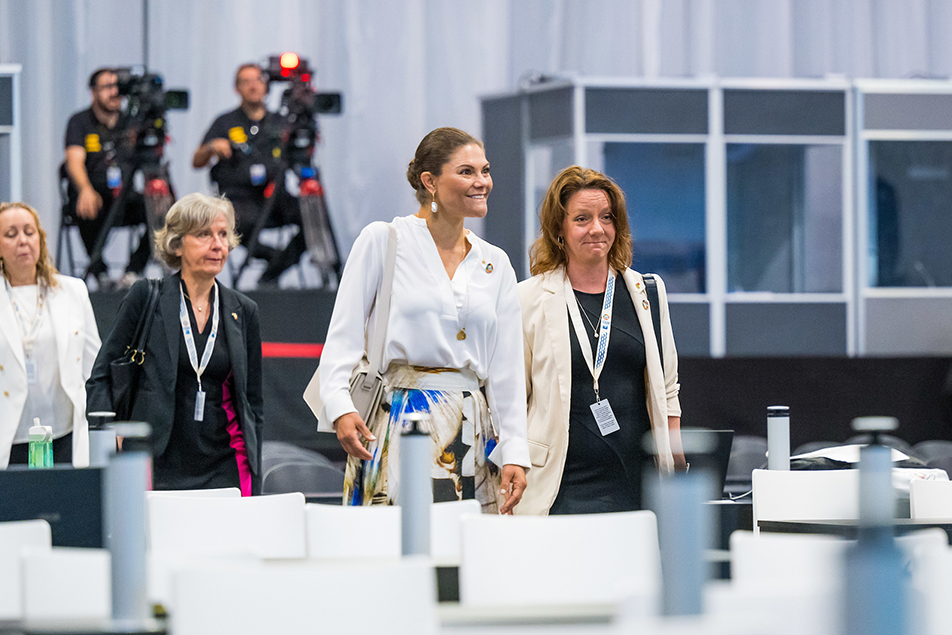 The Crown Princess, Minister for International Development Cooperation Matilda Ernkrans and Ambassador Helena Pilsas arrive at the event hosted by the governments of Sweden and Finland. Photo: Pelle T Nilsson/SPA

The morning concluded with The Crown Princess listening to a dialogue about how sustainable marine-based economies – especially in developing countries on small islands – can be strengthened.

After lunch, The Crown Princess and Minister for International Development Cooperation Matilda Ernkrans visited a stand at which the Keep Sweden Tidy organisation presented the digital game 'No time to waste – escape the plastic pollution'. 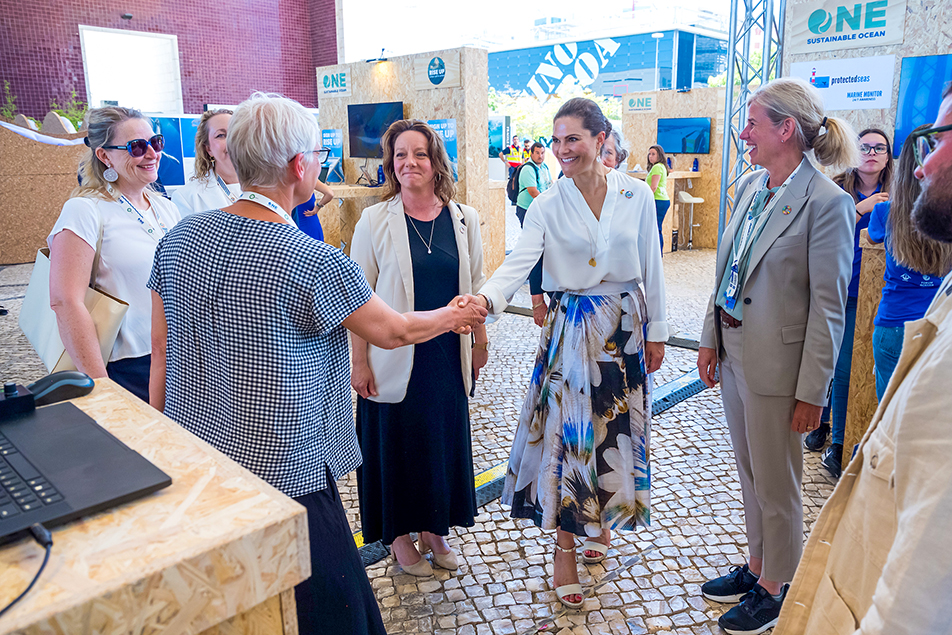 The Crown Princess and the Minister for International Development Cooperation then met Sylvia Earle, President and Chairman of Mission Blue/the Sylvia Earle Alliance for discussions on the oceans and the research carried out by Dr Earle. 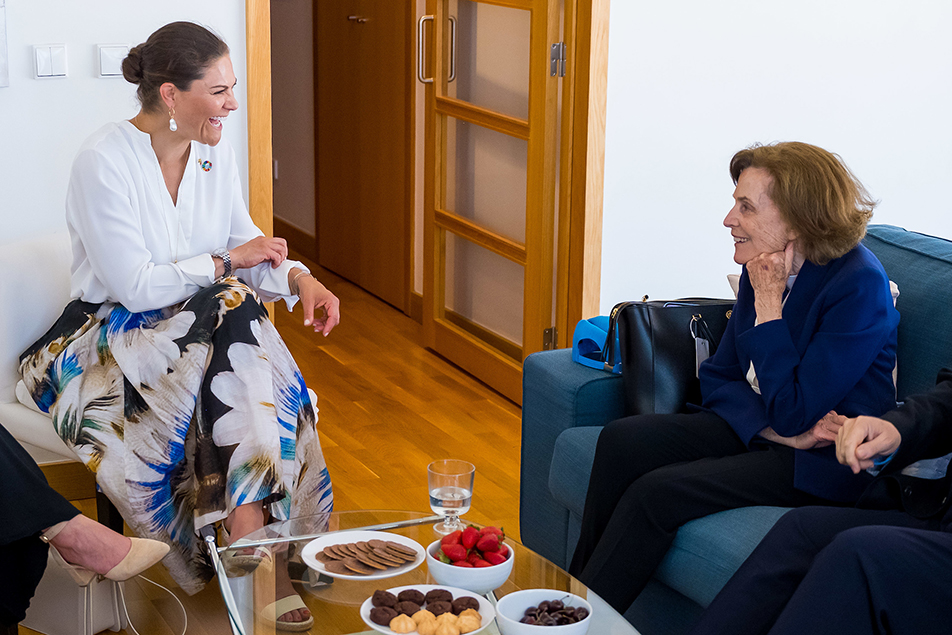 The day concluded with The Crown Princess and Minister Ernkrans attending Ambassador Helena Pilsas's reception at the Swedish Residence in Lisbon. 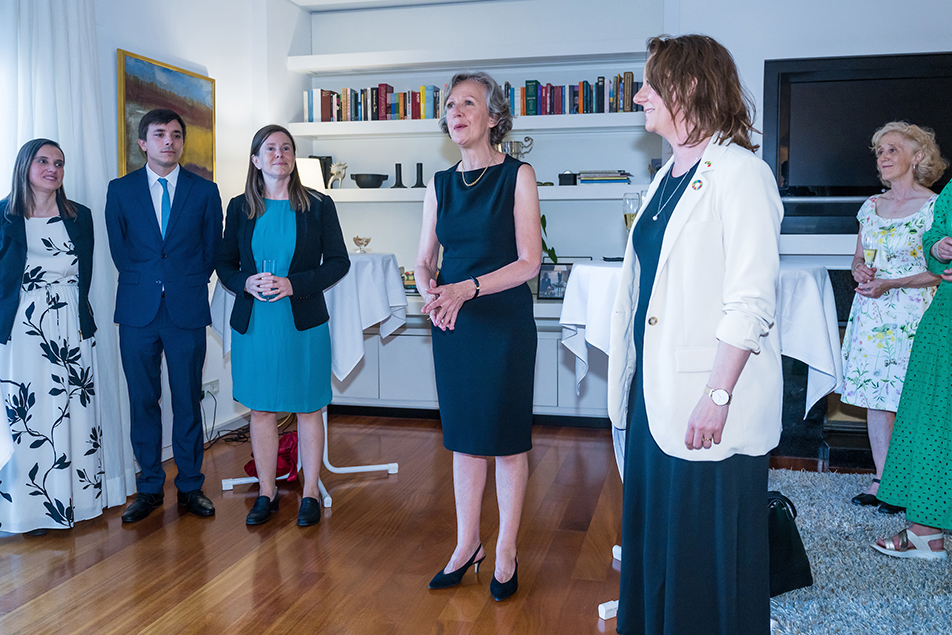 The Crown Princess began the second day of the conference by taking part in a breakfast meeting arranged by the International Coral Reef Initiative, at which the actions required to save the coral reefs were described and an action plan for the next three years was presented. 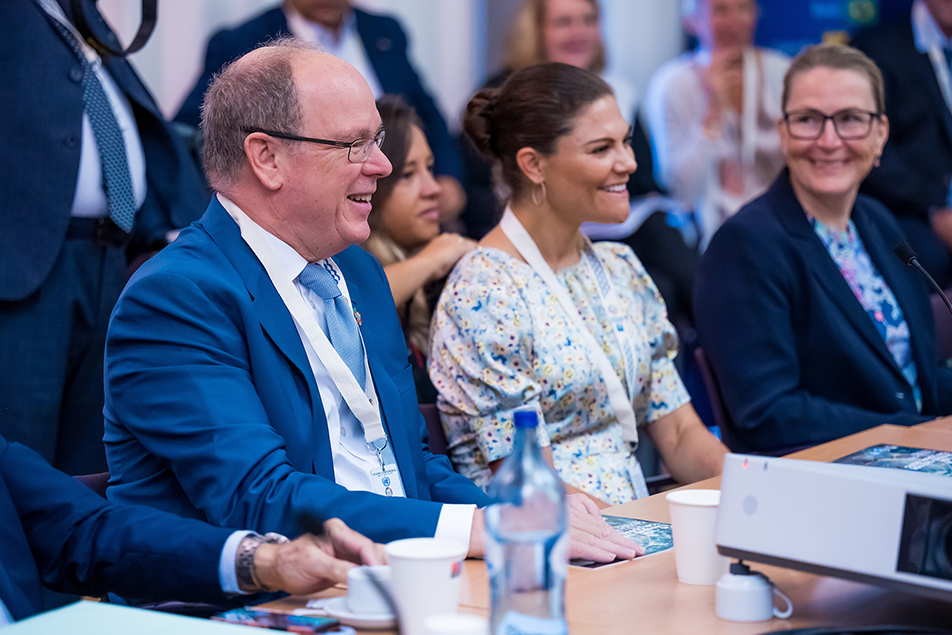 The Crown Princess with Prince Albert of Monaco during the seminar on coral reefs. Photo: Pelle T Nilsson/SPA

The Crown Princess and Ambassador Pilsas were then given a guided walking tour of Alfama, one of Lisbon's oldest areas. 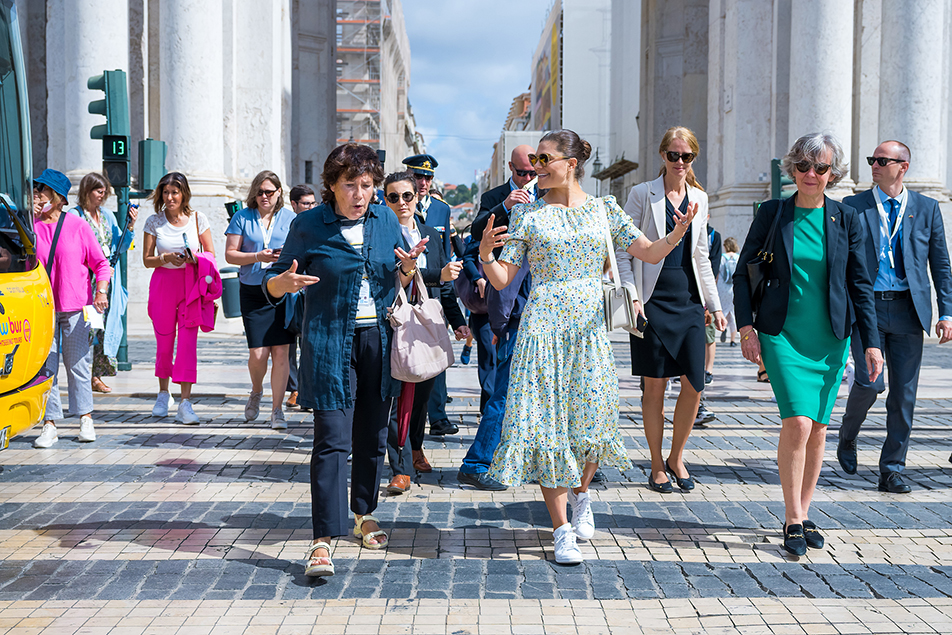 The Crown Princess was given a guided tour of one of Lisbon's oldest areas. Photo: Pelle T Nilsson/SPA

Launch of the SeaBOS report

SeaBOS (Seafood Business for Ocean Stewardship) is a partnership between researchers and ten of the world's biggest fishing and shellfish companies. SeaBOS aims to drive global work for the sustainable production of fish and shellfish, and for healthy oceans.

At an event during the conference, SeaBOS launched its report on the work carried out during the five years since the start of the initiative. As part of the launch, The Crown Princess gave a speech in which she said:

We need to see action that inspires hope. We need to believe that change is possible. And we need our children and grandchildren to know they can count on us. That the promises we make are promises that will be kept.” 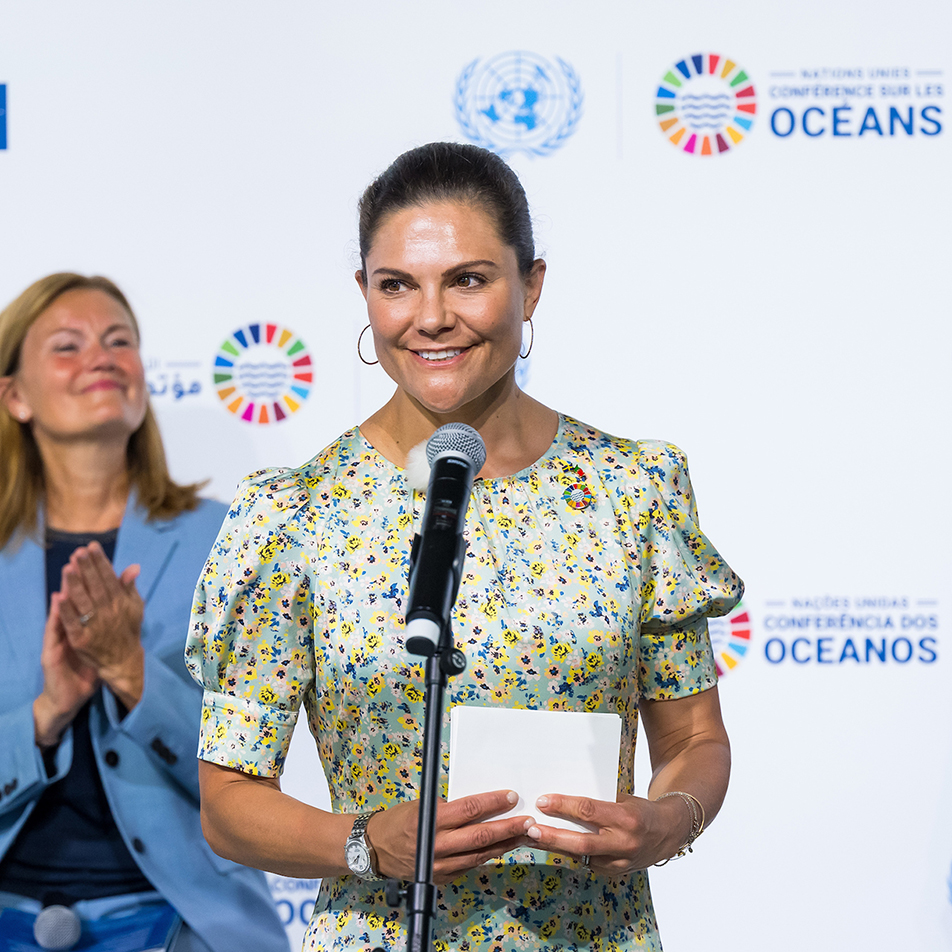 The Crown Princess gave a speech at the launch of SeaBOS's report. Photo: Pelle T Nilsson/SPA

In the afternoon, President of Portugal Marcelo Rebelo de Sousa received The Crown Princess during an audience at the National Palace of Belém.

The Crown Princess then visited the Jerónimos Monastery, where she was given a guided tour. The monastery is a UNESCO World Heritage Site, and has played a key role in the history of Portugal.

In the evening, The Crown Princess attended a high-level dinner with Friends of the Ocean at Lisbon Oceanarium. The dinner was hosted by the Government of Portugal and Ambassador Peter Thomson, UN SG Special Envoy for the Ocean.

The Crown Princess's commitment to environmental and climate-related issues led to the UN's then UN Secretary General Ban Ki-moon appointing her as one of 17 advocates during 2016– 2019 for the work involved with the UN's Sustainable Development Goals.

The Crown Princess is now an advocate emerita for the Global Goals, in which she retains a particular focus on sustainability, the sea and fishing.

Find out more about the global goals and Agenda 2030 at the United Nations' website.