On Thursday 24 February, The Crown Princess took part in a meeting focusing on global marine issues and the UN Ocean Conference. 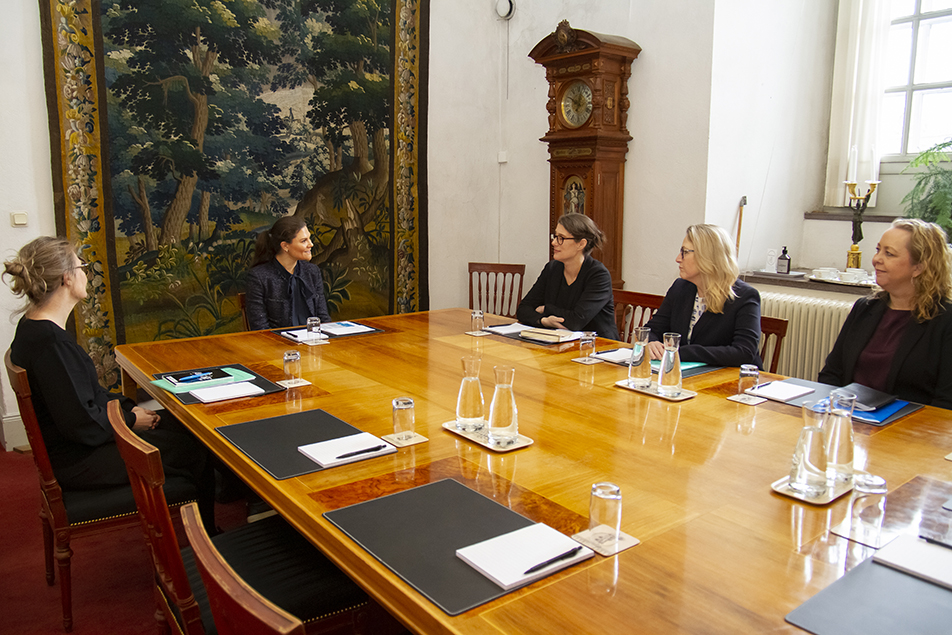 The Crown Princess with representatives from the Ministry for Foreign Affairs during the meeting at the Royal Palace. Photo: Henrik Garlöv/The Royal Court of Sweden

The Crown Princess was given an update on Sweden's work with global marine issues and the UN Ocean Conference, which will be held in Lisbon, Portugal, at the end of June.

The UN Ocean Conference follows on from the World Ocean Conference which was initiated by Sweden and Fiji in 2017. The conference took place in New York, and aimed to support the work involved in saving the oceans and achieving the development goal for the seas and marine resources, goal 14 of the UN's Agenda 2030.

This year's Ocean Conference, which will be co-arranged by Kenya and Portugal, will examine solutions for the sustainable management of the world's oceans and will highlight threats to the oceans' health, ecology, economy and management, such as acidification, littering and pollution, illegal, unreported and unregulated fishing, and the loss of habitats and biodiversity.

The Crown Princess's commitment to environmental and climate-related issues led to the UN's then UN Secretary General Ban Ki-moon appointing her as one of 17 advocates during 2016–2019 for the work involved with the UN's Sustainable Development Goals.

The Crown Princess is now an advocate emerita for the Global Goals, in which she retains a particular focus on sustainability, the sea and fishing.

Find out more about the global goals and Agenda 2030 at the UN's website.

Sweden and Fiji initiated and chaired the Ocean Conference, which was held at the UN in New York on 5– 9 June 2017. Almost 8,000 delegates took part in the event, which was Sweden's biggest individual UN commitment since the 1972 Stockholm Conference in which The King took part.

The World Ocean Conference focused on solutions, and was a meeting place for all relevant players. It resulted in more than 1,300 voluntary undertakings from countries, companies, organisations and other players. These undertakings involved everything from reducing plastics in the sea to stopping illegal fishing and strengthening the protection of marine environments.

The UN Ocean Conference will be held in Lisbon, Portugal, between 27 June and 1 July, and will be co-arranged by Kenya and Portugal.